Minuets, once known as Napoleons, were originally bred from Munchkin cats and one of the Persian breed (Persians, Himalayans, and exotic short hairs) to create a doll-faced Persian-like cat that was sweet tempered and without the health problems found in the Persian breed. They come in both regular leg lengths, called Minuet Talls, and short legs (dwarf) called Minuets.  Each version has that distinct Minuet face that is beloved of their breed. A single litter can produce both versions of leg length.

Breed: The Minuet cat began as a hybrid breed bred from Munchkins with any member of the Persian breed group. The Persian breed group includes Persians, Himalayans, and Exotic Short hairs. This was, and is still, being done today to expand the gene pool of parent cats who display the best qualities to pass on to future generations of Minuets and to cement desirable traits in new Minuets. Eventually, the breed will reach a point where the Persian breed group will be fazed out and purebred Minuets will come from only Minuets. However, at this point, a Minuet is a true Minuet if it has three generations of only acceptable outcrosses in its pedigree. Those include Minuets, Munchkins, Persians, Himalayans, and Exotic Short hair cats.

For the purpose of brevity, the word Minuets will include both Minuet shorts legs and Minuet Talls.

The Minuet is currently accepted by Cat Fanciers Federation (CFF) and The International Cat Association (TICA) in the United States. They are also recognized in Catz, Inc. in New Zealand and Ancats in Australia. All these organizations have advanced the Minuet breed to championship status, which means the Minuet short can show in championship.

Temperament: Minuets are sweet, loving, and easy-going cats. They are attentive and easily adaptable to different environments, and have a tendency to adjust to other people and animals as they come into the house. They are not known to be overly loud or demanding, and often show an intelligence evident of a problem-solving mind. At the same time, they are very curious and capable of developing strategies to work out problems. They are puppy-like in their demeanor, but also retain their cat-like dispositions. However, they also exhibit an air of dignity and grace that sets them apart from a puppy. Overall, the Minuet is an adorable cat that will be a constant source of delight for either a single person or the entire family.  Note: Not all cats will follow the temperament standard of any breed.

Physical traits:  The Minuet takes traits from both its parent breeds, the Munchkins and the Persian breed group. It takes its good health from the Munchkin breed and has a strong immune system. Its various array of coat colors and patterns also comes from the Munchkin, as well as its short legs in the dwarf version. Coming from the Persian breed group, the Minuet adopts its luxurious coat texture and dignified look, as well as its rounded facial features and short nose. However, it is a key issue with the Minuet Breeders that they do not create a mini-Persian.  The extreme features of the Persian are frowned upon in the Minuet breed.

The Munchkin background created a manageable coat for the Minuet, which is different than the high maintenance of the Persian cat. That means the long-haired Minuet has less of an undercoat than a Persian, and it is not so cottony, where it appears like a puff ball. The Minuet’s coat still stands slightly away from the body, and is soft and flowing. Although it requires maintenance, the long-haired Minuet is not as difficult to keep up as a Persian. The short-haired Minuet has a slightly longer coat than a normal short haired cat, with a plush, soft texture to it.

The key to the standard for Minuet traits is being round. The Minuet should appear round from every angle, starting with its head. It should have a round forehead that leads down to round cheeks and chin. The eyes should be large, round, and expressive, and set apart; however, they should not have a bug-eyed look or exhibit excessive tearing. The nose should have adequate leather with nostrils that present no difficulty in breathing, and a slight upward lift at the very tip. The top of the nose leather should not reach the bottom eye lid, which gives the Minuet its noted “baby doll” face. The facial structure of the Minuet should be healthy with adequate eye orbits, correctly aligned jaws, and good tooth occlusion. The ears should be medium to small, with rounded tips.

Minuets are considered medium sized cats, and their bones should be medium to heavy. The Minuet should be of sturdy build, with a body that is moderately long and rounded. The back should be straight along the spine; however, the rump of the dwarf version may be slightly raised due to its longer back legs. The Minuet’s tail should be in proportion to the length of its body, reaching to its neck, with a flowing plume.

*This cattery has NOT been inspected by and is not endorsed by The International Cat Association, Inc.

The Minuet in More Depth 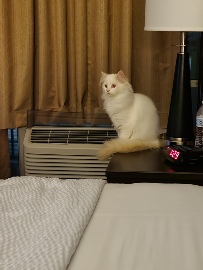 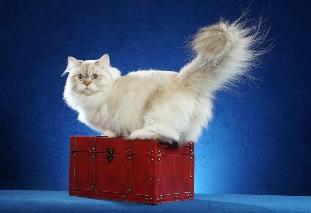