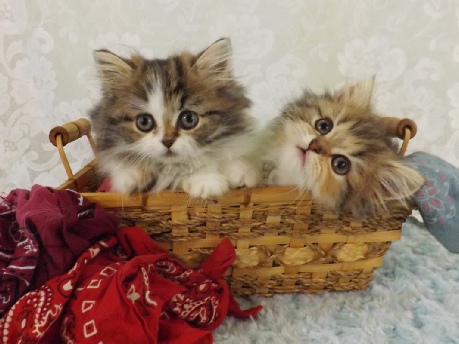 Our Cattery in Brief:

Tiny Lions Napoleons is run by Catherine and Bryan Rudy of Divide, Colorado, in the beautiful Rocky Mountains. It is dedicated solely to producing third generation Minuets, once known as Napoleons, that can pass along the desirable traits found in the breed.

It is the intention of Tiny Lions Napoleons to promote the Minuet breed as a serious contender for prime status among other cat associations and to compete for championship in showing. Tiny Lions also promotes education among cat lovers, appreciation for the breed, and producing only the best cats for breeding future generations of Minuets.

Tiny Lions celebrates both versions of Minuets–short legged and regular-legged.

This cattery is open to all questions and communication about our cats and the breed in general. Take a photo tour of our cattery here to see how our cats live.

Tiny Lions Napoleons began from a single phone call several years ago from our daughter, Robyn, who said she wanted to get a Munchkin cat. Neither my husband nor I had ever heard of a Munchkin, so I looked them up on the Internet. What came up wasn’t just Munchkins, but Napoleons (at that time, they were known exclusively as Napoleons). I was immediately enamored by the adorable face of the Napoleons (soon to be called Minuets) and I wanted one myself. When I showed a picture of one to my husband, he was hooked. He fell instantly in love. After hearing about their history and how recently they had come into being, he didn’t just want one, he wanted to be instrumental in promoting the breed. It was his suggestion to breed Napoleons that has brought us this far.

I didn’t immediately jump into buying just any Napoleon. As I am prone to do, I began to research the breed to ensure that the cats are healthy and not subject to physical shortcomings because of their smaller legs. I learned that they are not only healthy, but come without the risks that the Persian breed group comes with, which is in the Napoleon’s background. I was satisfied with what I discovered and turned my research into looking for reputable breeders in order to find the perfect cats. These cats would not only become a part of our breeding program, but become members of our family. I found Blue Sky Cats, run by Kristin Dubois, who became a great inspiration and mentor for us to develop our breeding program. She shares the same mentality about promoting the breed by producing excellent traits in her cats. To this day, Kristin has been an inspiration and a fantastic source of help. If you are looking for reputable breeders of Minuets and can’t find a kitten here for yourself, don’t hesitate to check with Blue Sky Cats. Kristin is very honest and helpful, and considers her cats before anything else.

It took a while to find our first two girls, which required getting on a waiting list. Finally, we were notified by Kristin that we could choose among several kittens which ones we wanted, and if they were still available after others on the waiting list had made their choice, they would be ours. Luck was with us and the two girls we chose were available. In August 2015, we were able to bring our two girls home. We named them Lady Bing and Queen Josephine, but they are affectionately called Bing and Josie.

We bonded several months with our girls before we started to look for our first boy. That search began in January 2016. Finding our boy was not as easy as we hoped and we experienced several setbacks and disappointments in locating just the right one. We were concerned with pedigrees and avoiding line breeding, and finding a boy who could also show in championship. We had extremely high standards and those promised to defeat us. But we stuck to our guns to keep to our business plan, which was promoting excellent kittens in the breed. Once again, Kristin was an invaluable asset. She pointed us to breeders who had boy kittens that might suit us and was encouraging when we grew frustrated with disappointment. It eventually got out to a few select breeders we felt comfortable dealing with that we were looking for a boy to begin our breeding program. Those breeders were very helpful as well.

Eventually, we were notified by Judy Felsman of Judy’s Cuties that she had a boy we could look at. As it turned out, he was as near to perfect as we could get. We watched his development with an air of apprehension, given the disappointments we had already experienced in finding a boy. We didn’t want to get too attached to him in case something turned up that he wouldn’t fit our program. But after all the searching and hoping and waiting, we finally got to take him home. He became Clawed LeMieux, our first and only stud boy. He has since grown into a marvelous cat, becoming a quad-grand champion in TICA within a few short months of showing as an adult. He became the South Central Region’s best Minuet kitten of 2017 and best Minuet cat of 2017.  We retired him from showing for a while, but then took him to a show a year later when the whole family was going to Amarillo, TX for a show.  For the heck of it, I put him in the show and he Supremed!!  A supreme grand champion is the highest title a cat can receive in TICA.  To see Claude’s other accomplishments, click here.

Desiring another cat to show in TICA, we began looking for another female kitten. She, too, would join our breeding program when she reached a year of age. In the meantime, we could show her as a kitten, then as an adult. Finding a wonderful cat that was a second generation Minuet, not related to Claude, and of show quality, was difficult. I went to Judy Felsman of Judy’s Cuties, where we’d gotten Claude, and posed my dilemma. She bred several of her females to Remington, who is not related to Claude, to see what she could produce. Every litter proved unsuccessful in producing a standard female–until the last one. She produced a lilac and white standard female and we jumped at the chance of taking her. When we got her, we named her Gabrielle Landesclaw, Ellie for short. That was on July 29, 2017. She has turned into a beautiful girl, although she is not a lilac and white, but a chocolate silver shaded and white mackerel tabby, another stunning color. We then got a beautiful chocolate lynx point and white standard kitten, that we named Catrice Purrgeron (Katy, for short), but she won’t be used for breeding.  Her story can be read on my blog, Cats Happen, in the article, My Kitten with a Big Heart and on the Facebook page, Tiny Lion’s Little Katy, Little Kitten with a Big Heart. Since then, we have added Sydney (Blueskies Sydney Clawsby) and Lexie (Pawcity Alexis Ovechkitten of Tiny Li) to our family.

Tiny Lions Napoleons is a no-cage cattery, with the number of cats we have being small. We integrate our cats into the family so we can enjoy them just as much as anyone who has a cat as a pet. As such, our cats learn to socialize with people, dogs, and other cats, and they vacation with us. They have the run of the house. When you get a kitten from us, they will have had the same social interaction as the adults. You can take a photo tour of our cattery here to see how our cats live.

Minuet cats come in two versions: regular legs and short legs. The only way to differentiate the two is leg length. Both have the same beautiful doll-like Persian look without the health problems of Persians. Both versions can be produced from the same litter and we celebrate both. No one should consider Minuets as solely “dwarf cats.”

If you have any questions about Tiny Lions Napoleons or the breed itself, please don’t hesitate to contact us. We can be reached at: