Clawed Lemieux (Claude) is our own stud and we are very proud of him. He is a chocolate mackerel tabby and white long hair standard Minuet. He is a Supreme-Grand Champion in TICA and achieved many awards before we retired him from showing because he became more interested in girls than proving how beautiful he is. He is a loving boy and has a wonderful personality. He produces some amazing babies, which you can see and judge for yourself below. These are only the babies he had for us. We loaned him to Lynn Brown, of 406Paws Cattery in Montana to breed with her girls a couple of times.

Leo, on the left, and Ceviche, on the right, are two of Claude’s first litter. Their mother is Lady Bing and they are also her second live litter. Leo is a long-haired nonstandard brown classic tabby and white like his mother. Ceviche is a long-haired nonstandard brown classic tabby with white as well. He is an odd-eye cat, meaning he has one blue eye. 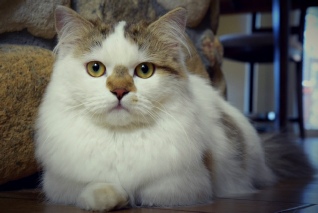 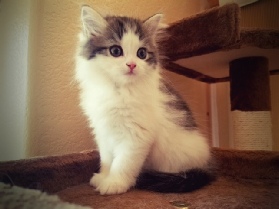 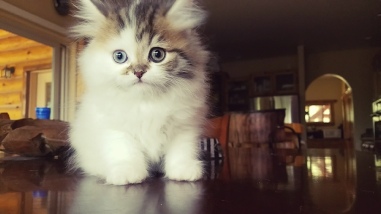 We call Duchess Mizzy 2.0 because she is a super-energetic kitten. Cleo just wants to snuggle with people and love them, although she enjoys playtime just as much as Duchess does. 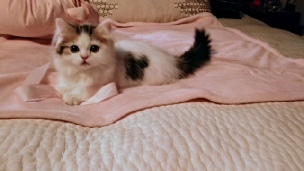 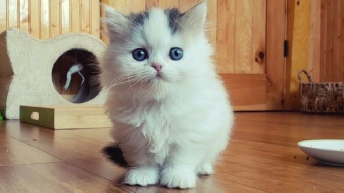 Otis, to the left, was the only kitten from Claude’s third litter with Lady Bing. There was only one kitten in the litter and Otis was cherished dearly. We thought there might be a problem with him learning to socialize being that he was an only kitten, but that didn’t happen at all. He was soooo interested in loving people and other cats that he became such a darling. Milo’s parents (one of Bing and Riddler’s kittens) waited anxiously to take him home as their second Minuet. He is a brown classic tabby and white. 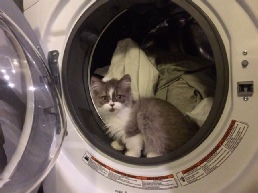 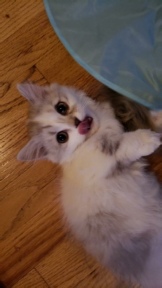 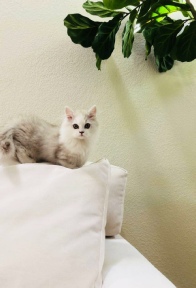 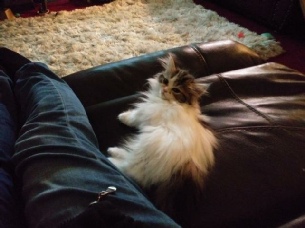 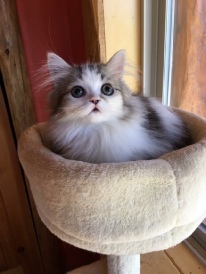 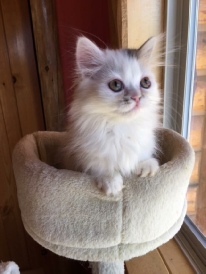 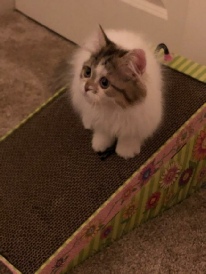 Bing and Claude’s fifth litter were three standard babies, two boys and a girl. From left to right are Toby, May, and Smudge, and each is a brown classic tabby and white. Toby is our nurturer, while May is the daredevil, and Smudge is the class clown.

May went home to a new breeder in California. As of this writing, May has had her first litter. 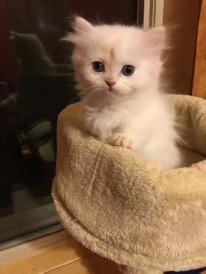 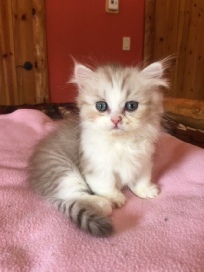 Claude’s seventh litter was with Ellie (Gabrielle Landesclaw), which was their second litter together. There were two standard boys. To the left is Pillow, a chocolate mackerel tabby and white.  To the right is Neko, a silver shaded mackerel tabby and white, just like his mom.  These little guys are doll babies. They grew up with Toby, May, and Smudge (above) and had an extended family.

Pillow went home to a new breeder in California who was trying to breed Scottish Kilts. As of this writing, Pillow had a successful litter of four kittens.  Three of those kittens were Scottish Kilts!  What an incredible surprise. 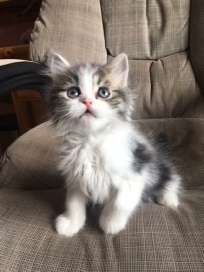 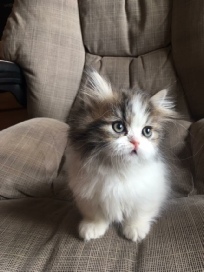 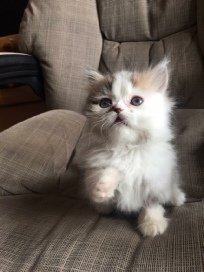 Claude’s eighth litter was with the love of his life, Lady Bing. Magic happened to create these three beautiful boys. From left to right, there was our nonstandard boy, Grey, and two standards, Gizmo and Rolow. All three are the typical brown classic tabby and whites that Bing and Claude produce, but also having that precocious, and lovable personalities. 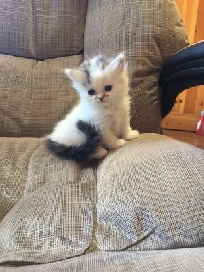 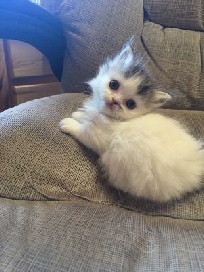 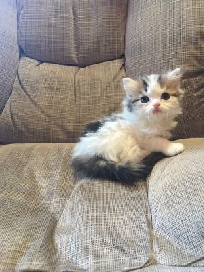 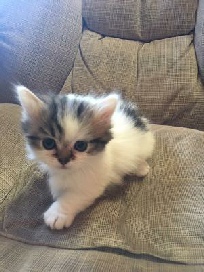 Claude’s ninth litter was his last litter with Bing. She was going to be five years old, so we decided it was time to get her spayed and give her a life of relaxation with us. For her departing gift, she gave us five kittens, although sadly, one did not thrive. Still, four beautiful brown classic tabbies and white completed her career of breeding with Tiny Lions Napoleons. She had Aloo, a standard girl; Sushi Girl, another standard girl; Etzio, a nonstandard boy; and Kevin, a standard boy.  Not surprising, all were brown classic tabbies and whites. Thank you, Bing, for all your hard work. You are an incredible mother and we will miss your children. 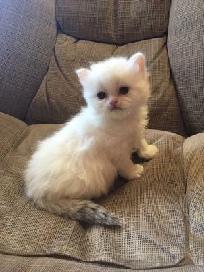 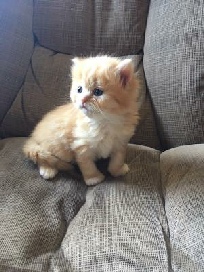 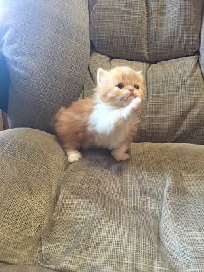 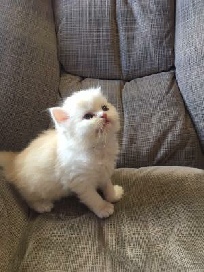 Claude’s tenth litter was his first litter with our #1 Minuet LH in the world (2020), Supreme Grand Champion Blueskies Sydney Clawsby of Tiny Lions. It was her first litter altogether and we were excited to see what these two champions could produce. What an amazing assortment of kittens they gave us. The first was a nonstandard chocolate lynx point girl, Penny–beautiful. The second was a nonstandard red mackerel tabby and white boy, Milo. He was the lover of the crew. The third was a red classic tabby and white standard boy, Tigger. This is the kitten I would have picked to show. The last kitten was a red silver shaded tabby nonstandard boy, Henry. He is a stunning kitten and will make a remarkable cat. Congratulations to Sydney for taking the reins over from Bing.

Claude’s eleventh litter was his second litter with our #1 Minuet LH in the world (2020), Supreme Grand Champion Blueskies Sydney Clawsby of Tiny Lions. It was her second litter altogether and we were thrilled that the winning combination continued with this litter.  I was amazed that the four kittens born to the happy couple were different color combinations than their first litter.  However, we lost one kitten at around two and a half weeks old, leaving us only three beautiful babies.  And beautiful is a word that doesn’t do these kittens justice. The first is a chocolate silver shaded classic tabby with stunning blue eyes!!  She is a nonstandard girl and was named Evie. The second is a nonstandard red silver shaded lynx point boy, Max, who went home with the same person who took Milo from Sydney’s first litter. The third is a darling torbie lynx point standard girl, Maya. Congratulations to Sydney and Claude. 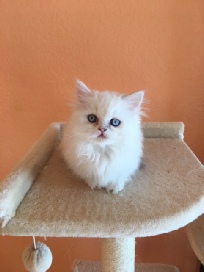 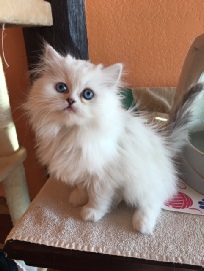 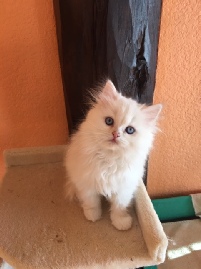